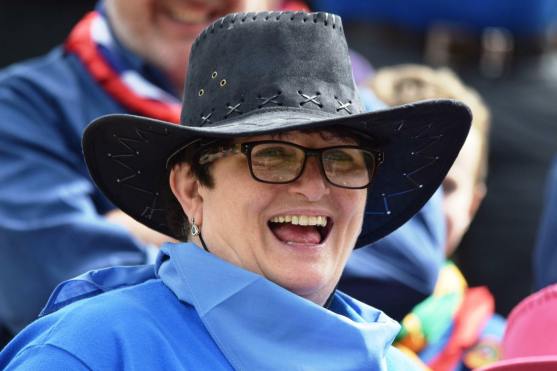 Pauline Lucas, who has been at the forefront of driving youth programme in Scouting Ireland since the association’s inception signalled her intention to resign by letter yesterday.

A towering figure in the Scout movement in Ireland, Ms Lucas is well-liked and hugely respected across the association, no mean feat in these days of a deeply divided organisation.

Her central role in the development of the current youth programme; a drawn out and at times controversial process, earned her plaudits with supporters and opponents of the process alike. Her appetite for work combined with a ‘can do’ attitude enabled her to cover ground and deliver many chunks of this immensely complex project quickly and to very high standards.

In an association full of headstrong, opinionated leaders, Pauline whilst being headstrong in her own way still managed to get people working together consistently, deploying a disarming charm and eschewing mind games and politics in favour of a relentless focus on the end user – the youth member.

The large team she has been leading, latterly stepping into the shoes vacated voluntarily by Dave Shalloo, the Chief Commissioner of Youth Programme during the Lynch investigation, is collectively responsible for the delivery of national events countrywide for 40,000 scouts, but also provides vital programme support for scouters and young leaders around the country.

Rumours of further resignations in the pipeline from the same wider team if true, would trigger a crisis for the board of Scouting Ireland, already struggling with historic abuse cases, open warfare between senior staff and senior volunteers, a deeply disenchanted, skeptical and divided membership and predecessors who continue to cling to office, despite having no electoral mandate.

Scouting Ireland, notwithstanding some very real and pressing challenges at present is, when all is said and done, an entity that exists to support the development and growth of children and young people. In much the same way as a cake factory exists to make cakes or a car plant’s purpose is to output vehicles Scouting Ireland is primarily about youth programme (is it not?).

When the raison d’être of an entity is compromised or put at risk by other factors, it is incumbent on the leadership to act. This latest challenge will require careful thought and rapid action, not least because with spring around the corner, major events delivered by the programme team are now well into the planning stage. Disruption will cost time and money.

Whether Ms Lucas can be convinced to remain in the role will depend on some pretty strong negotiation skills, however with poor relations between senior staff and senior volunteers and a board that does not look to be fully in control of the macro agenda at Scouting Ireland, anything could happen. The optimum outcome alas looks unlikely.

The board of Scouting Ireland need to give short shrift to the embarrassingly juvenile practice of somebody actually spending time and resources counting unflattering comments about senior staff and the NMC on social media channels. Its this type of immaturity and detachment from the bigger picture that has gotten us into this mess in the first instance.

Instead devote some time to realities on the ground that clearly illustrate members (and far more than er, seventy of them) are at the end of their tether.

Either way, theirishscouter wishes Pauline well. There are few scouters on the national stage presently that come close to her in terms of calibre and integrity.

One thought on “Pauline Lucas Resigns”