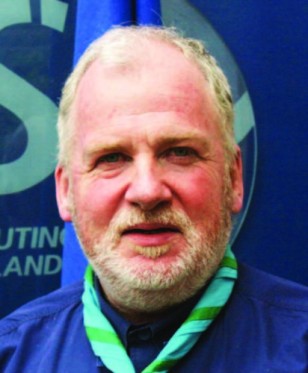 It was with sadness that I learnt today of the passing of Michael John Shinnick, our former Chief Scout.

Michael John and I worked together on several projects from the earliest days of Scouting Ireland, when we both sat on the NMC together. Always quiet spoken, I was impressed from early on with him because whilst he said little at NMC meetings, whenever he did speak, the room was silent. His views were usually worth hearing.

A definite highlight of his time in this role was the 2007 National Council, run in the Southern Province (in Killarney). A joint project between the Provincial team and the Communications team, this National Council raised the bar and helped to greatly increase interest in and attendance at this annual meeting of the association.

In the role of Provincial Commissioner Michael John was easy to work with. His contributions were positive and supportive and he had surrounded himself with a team of highly enthusiastic and energetic scouters.

As Chief Commissioner for Adult Resources, albeit briefly, he and I (as Communications Commissioner) worked together several times often on sensitive issues, sometimes involving late night phone conversations where his calm demeanor and clarity of thought were a great asset and made him a stable and invaluable colleague.

In more recent times Michael John and I frequently disagreed sometimes stridently, about the direction Scouting in Ireland should take and the pace at which progress should happen. I recall his views around communication strategy as an early example where he would (to my mind) resist innovation and try to ‘hold the line’ in the face of what I assumed he regarded as a seemingly never-ending push for change, away from some aspects of the Scouting he grew up with.

Still, the ‘Vision 2020’ initiative, conceived and driven to a large extent by Michael John, was an innovative and arguably revolutionary set of ideas that, had he not been let down on the implementation front and had the consultation been more widespread, could have been hugely successful. Perhaps, in some sort of revamped format, it still will be.

Michael John’s managerial prowess, political astuteness and flair for getting things done no doubt also helped him to secure the necessary support to become Chief Scout. Some scouters at that National Council in 2009, confided that whilst their heart said ‘no’ to Michael John’s brand of Scouting, their heads said ‘yes’ to a competent problem solver who could take the association forward.

Regardless of whether one got misty eyed at a vision of traditional values and Scouting as it once was or if this made you lie awake at night in a cold sweat, admirers and critics alike could agree that Michael John had the ability and the focus to deliver on his vision. That confidence and determination frequently commanded respect, even in the context of disagreement.

But in the midst of many differences of opinion, Michael John and I maintained a good relationship and stayed in regular contact. He welcomed me to his office in Fermoy on more than one occasion, where we debated good-naturedly on the many points where we did not see eye to eye. We had tea together in my home in Kildare just a week or two before I moved abroad.

When I heard first of his illness, I expressed the view to him that a man of his energy, relative youth and towering strength would easily overcome it, in time. Alas, this was not to be.

My hope was that, following the end of his term as Chief Scout, he would lead by example and continue to contribute to the association in a big way, to show that being Chief Scout (or the holder of any senior office) does not need to be the end of a scouter’s journey, it can merely be a very big highlight on the trail.

We were both at National Council in April 2015, but I narrowly missed him, having just left the meeting before he arrived unexpectedly. The reception he received at the RDS left no one in any doubt of the esteem in which he was held.

I put it to him once that he was more of a ‘manager’ than a ‘leader’. He just smiled at me with those piercing blue eyes and raised his eyebrows in quizzical fashion.

In the final analysis I think he probably made his point.