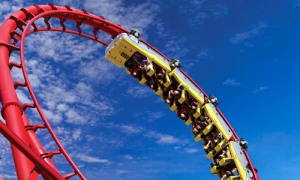 Scouting Ireland’s supreme governing body, National Council, met in Dublin on Saturday. The meeting was perhaps the best chaired National Council to date; official, but not officious, brisk but people got their say, good-humored too.

Delegates perhaps already had an inkling upon arriving that the day was going to be a strange one, but its unlikely anyone could have predicted the events as they unfolded.

The venue was also one of the better locations chosen for the meeting. Central, well served by public transport and a fitting place for a major youth organization to hold their annual meeting – comfortable and with status, but not unduly opulent.

The flow of the venue worked well with check in at the front, the main meeting auditorium in the middle and the coffee and expo areas to the rear.

The exhibition area was a lot bigger than it needed to be (or perhaps could have had more stands) and the coffee break out area was quite sterile, although the coffee was good and the food on offer (sandwiches, cakes, drinks) seemed broad, of good quality and not too expensive, given the location.

The meeting, perhaps not entirely surprising in an election year, seemed to attract a good attendance and a good cross-section of age ranges, locations etc. that highlighted the diverse nature of Scouting Ireland.

THE BLAND AND THE GOOD

The National Secretary/CEO report was disappointingly bland – a series of (albeit very nice) images and quotes, with no real substance to it. It seemed calibrated specially to minimise debate – show them some pretty pictures and they’ll be happy.

By contrast, the Financial Report was clear, concise, comprehensive and delivered openly and honestly by both the National Treasurer and the Financial Controller, who welcomed questions. Whether the associations deficit can be solved by scrutinising print bills when the big ticket items are staff and admin costs remains to be seen, but the format of National Council does not create provision for follow up questions or debate

The arrangement by which speakers on the various reports had to be in the queue to comment before the report ended meant that one either watched or commented – one could not do both. Equally, the caveat from the chair that comments could only relate to the period of review served to make things difficult for delegates to have their say on an item – it is getting to the stage in Scouting Ireland where only forensic analysis completed in advance of the meeting itself will get you an opportunity to critique national policy – that is perhaps not intended, but it would be unfortunate.

However, in the context of the events that unfolded at national council, the book-lined walls at the RDS, the reasonable Americano and the wide range of displays all paled into insignificance.

For the first time in the history of Scouting on the island, the association did not elect a Chief Scout, despite two strong candidates being available as late as 24 hours before the event. This has created an unprecedented set of circumstances for an association that is increasingly desperate for positive change and unifying leadership.

All eyes are now on the newly elected (and from the looks of it, fairly high-calibre) National Management Committee, to carefully lead the association in the coming weeks and months towards an outcome to this unique situation, that will unify the association and begin the slow process of building trust.

Theirishscouter will publish a separate article on the topic of the Chief Scout role and the recent election results in the coming days.