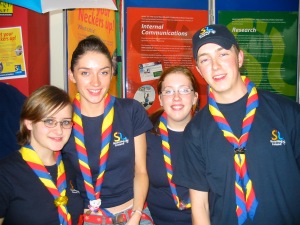 Does any of this matter?Most local Scout Groups continue to flourish. Vast numbers of volunteers still work in local groups. Scouts still love to camp and hike. Collectively, Scouting makes positive differences to the lives of thousands of Irish young people every day of the week.

At National level, there are some brave volunteers who fight the reams of red tape and the obsession with pomp and ceremony to deliver top class events, superb programme and many forward-thinking strategies.

No, it probably does not matter in some ways. However a change of course back to the values, ideals and vision we set out with in 2004 would benefit local volunteers who run and are part of a very different and much more relevant Scouting Ireland to the one that the current generation of leadership at National Level are so wedded to.
Scouting Ireland needs to refocus on supporting local groups. It needs less administration and less expenditure associated with it. It needs real transparency in decision-making and the elimination of ‘remarkable coincidences’ from the staff recruitment process.
There is a spiritual dimension to Scouting, but its one of several key pillars, not the only one. The authors and sponsors of the latest ‘Vision 2020’ document need to read the mood of society and the membership of their own association more carefully before attempting to impose their own personal interpretations of ‘faith’ on a highly diverse 40,000-member entity.
Above all, Scouting Ireland needs leadership that is demonstrably impartial and truly represents ALL members equally. Currently, the leadership are interested only in their own (traditional, conservative) constituency. The true test will be and the lasting legacy will come from an ability to represent EVERYONE equally (and be seen to be doing so)
Scouting Ireland still has enormous potential. The National Association is a vital cog in the association’s engine from a profile raising, policy generation and advocacy perspective. But when the local Scout groups are taken out of the equation, the ten-year anniversary is currently looking and feeling a little hollow….

One thought on “Ten Years On….”